It’s that time of year – cooler weather, football…and chili! Growing up in rural North Dakota, we served caramel rolls with our chili. I know – to those of you from other parts of the Midwest, that might sound very unusual! That’s because there are noticeable regional differences in how we make and serve chili in the United States…and even throughout the Midwest.

There are other variations of chili and ways to serve it, too, that apply to several different regions. For example, consider white chicken chili, which uses white beans and can be made with broth and cream. And you can always use leftover chili to make fan favorites such as chili mac or chili dogs. There are even trendy new chili ingredients to consider, like cocoa powder, whiskey and molasses. Our Martin Bros. Fall/Winter Menu, for example, features a Secret Ingredient Chili recipe that uses cocoa powder to give the chili a rich flavor.

So, mix it up this season and serve different regional and trendy chili favorites as LTOs! It’s sure to be a hit as people look for new foods to warm them up this winter!

Click here to check out a Martin Bros. recipe for Pork Chili, which would make a great, hearty addition to any menu!

SideDish! is delivered to your inbox every month and gives you access to tips and trends to make your business more efficient and profitable throughout the entire year. You'll learn from the experts specific to your industry including, healthcare, medical supplies, restaurant supply, janitorial supply, large kitchen equipment, restaurant marketing and more! 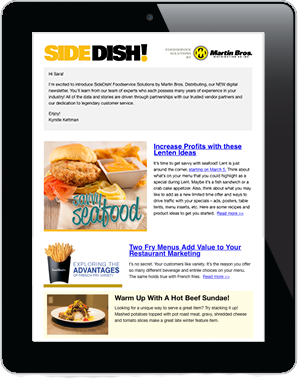